I finally heard from CMT that I was “in” for the taping of Crossroads with Train and Martina McBride.  I must admit, I didn’t know anything about that show, since I’m not a big country music fan, but what a brilliant idea.  It introduces artists to a whole other audience…I didn’t know Martina’s music, even though her daughter goes to school with my daughter, but now I think I’m going to have to start listening…she is amazing!

As I mentioned, I was there because I’m a huge fan of Train (Pat Monahan in particular!), and because I won a facebook drawing for the tickets to the private taping.  (See, Mom, Facebook truly does come in handy!)  I was told they were non-transferable, so even if I had decided to sacrifice seeing the show for H and a friend, they couldn’t get in without me.  (In actuality, they probably could have…I just told them my name and they checked it off and gave me two tickets…didn’t even ask for ID-but don’t tell her!)

Anyway, the doors were supposed to open at 7:00, and close at 7:45 for the 8:00 taping at Rocketown.  J and I headed downtown for a quick bite at Sole Mio (which has incredible homemade pasta and sauces, but since moving from their original location lacks a bit of ambiance).  We parked halfway between the restaurant and Rocketown (about four blocks apart), and rushed our dinner to get there before the doors closed.  We anticipated general standing room only admission, so decided halfway through dinner to try to get there closer to 7:15 so we wouldn’t be stuck in the back.  We checked in, picked up tickets and were shown in to our seats (yay!) about 8th row center.  Not bad!  We chatted with the folks seated around us, and realized they were all there to see Martina, and didn’t know Train’s music.  We told them they were in for a pleasant surprise.

Around 7:55, the director (I guess) walked out on stage, welcomed us, and gave the standard spiel…no videos or flash photography.  Then we recorded three rounds of applause to be used later in the show…light applause, a little more with a few whoops, and all out with screaming and pumping arms.  Then a standing ovation.  But to keep it from looking staged, he would point to sections of the audience during the ovation to stand up in a more natural way.

Then the band tuned up a little, and Pat and Martina walked out on stage.  Applause, applause,  Martina welcomed everyone and they started into her song, “Wrong, Baby Wrong”.  She had on these delightful sequined pants/leggings/spray paint…not sure which, but since she is as big as my little finger, they looked amazing.  Pat had on his typical black sportcoat with a light collared shirt, and not to be outdone by Martina, some kind of jeans that looked amazingly like leggings.  I’m not sure who is smaller, Martina or Pat, but when they opened their mouths to sing, their voices filled up the room.  I’m not sure if it’s because I’m a little bit prejudiced, and not to take away from Martina, but when Pat sang, his voice was so much more powerful it made her seem even smaller.  About five lines into the song, Martina said, “I’m sorry, I missed it.”…so they walked off and back on again to do it over.

Then Jimmy Staford, Train’s lead guitarist, joined them on stage and they sang “Whatever You Say” and “Broken Wing”, both Martina songs, and both sounded like they’d been singing together for awhile.  They were clearly enjoying themselves.  After those songs, the director returned for another chit chat, and they left the stage to redo the walk on one more time, followed by “Wrong Baby Wrong” again, but this time, Pat did the intro after the song. 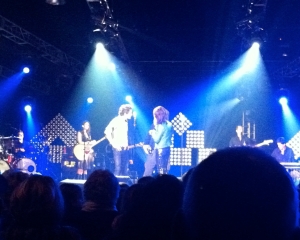 Then there was a short break, and we heard more audience members asking questions about Train.  I guess here in Nashville, at a country music singer’s concert, that’s to be expected.  Entering the “Train” portion of the show, they started with “Drops of Jupiter”.  Wow.
After it was over, Pat looked at Martina and said, “I feel like Chris Farley…remember how you sang the shit out of that song?”  It was very cute.  Martina was gracious but didn’t seem as star struck as Pat seemed with her.   They followed that up with “Hey Soul Sister”, and finally the audience seemed to wake up…a genuine standing ovation!

Pat made a comment about Martina dancing more, and an audience member yelled out, “No, Pat YOU need to dance more!”  He quipped back that his dancing somehow seemed to simulate a stripper, and proceeded to turn around and do just that.  Next, they sang “Marry Me”…beautiful duet, and “Calling All Angels”.  Another director tete-a-tete and they redid “Drops of Jupiter”,  and finished up with “Stay with Me”…Rod Stewart’s song.  I’ve seen three Train live performances now, and that seems to be their tradition…to end the show with a Rock and Roll classic.

I left this show and did what has become a tradition for me.  Looked up future concerts to see when I can go see them again!  No matter what kind of show I see, it always leaves me wanting more.  I have a dream that one day we’ll invite them to our house to share a good bottle of cabernet…Dreams are good, right?